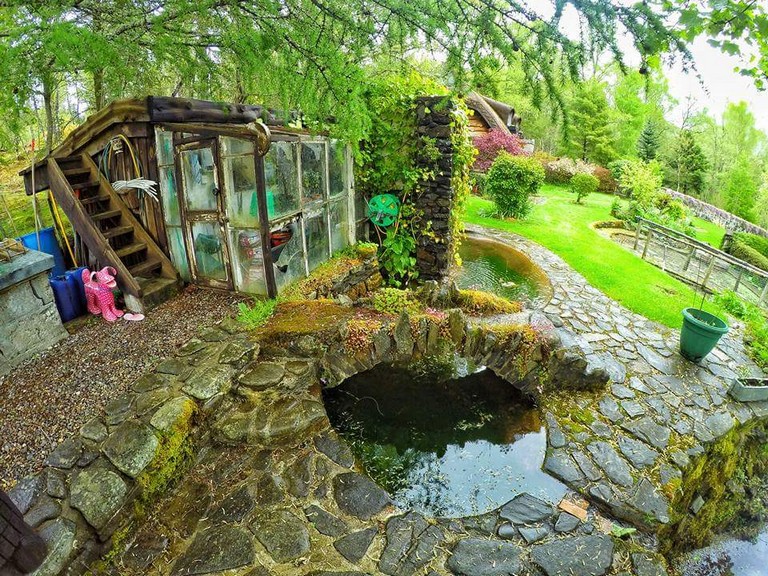 With patience and taste of art as well as creativity, resulting in this magical hobbit-style house in Scotland. Situated just outside of Tomach, a village in Scotland the house is built by a team of husband and wife using the objects that can be found in the wilderness in their surroundings. They put effort and endless creativity to turn the objects into the parts of their dream house.

From the refreshing green exterior to the simple to the homey interior, the warmth of the family’s love is reflected in the interior design itself. Looking at this different kind of house in Scotland, makes us think of adopting the style to our own home.

Built almost all by concrete, the exterior of the main building is the perfect place for mosses and vines to grow, making the exterior looking green all over. How concrete weathers by the exposure to the air and sunray making it even more charismatic as time goes by.

The woodwork elements are the most standing out about this mind-blowing house, in fact, most of them are carved by the owner. The owner even reuses the seemingly unusable objects such as wooden barrel and creates a fully functional yet decorative purpose out of them.

The use of turf roof adds the traditional rural feeling to the house. Turf or sod roof was popular in the past and this roofing is also good for a place with cold climate as it acts as an
efficient insulator.

The backyard is looking gree with the combination of garden and patio with the addition of flat stones for the pavement.

The picture itself is the greenhouse near the main building. The sense of rural area is a strong herewith small pond and water wheel, not to mention the tiny bridge in the middle.

As the style suggested, the hobbit style house in Scotland, the interior is not in favor of a very tall person. Once we go in we will feel cozy in an instance. The hand-crafted woodworks are everywhere in the room and the long curved sofa placed close to the wall provides enough sitting for everybody despite the limited space.